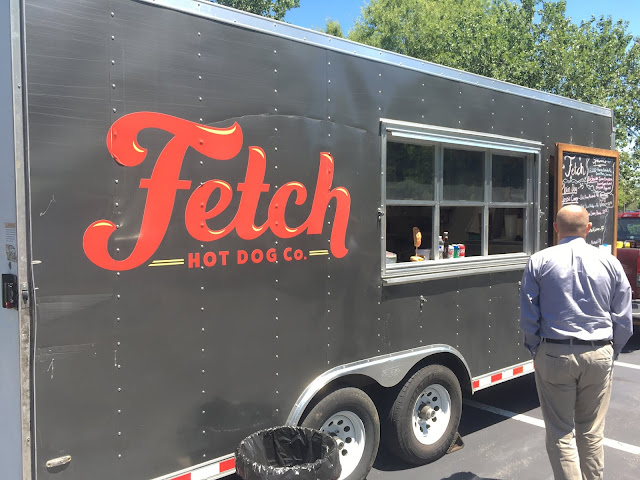 Fetch was a food truck.

Sadly, it rolls no more. Another dog-gone-bye. 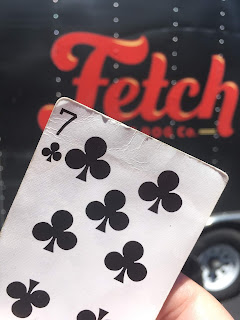 Even thought their Carolina dog wasn't really what I grew up loving, I miss that truck. It used to stop on the occasional Wednesday at the office park where I work.

Fetch was all about creativity. From the food to the way they coordinated orders, cleverness ruled. When you placed an order, they gave you a card from a regular playing cards deck. Then, they called your card, (i.e., seven of clubs) when your dogs were ready.

Their Carolina dog was a bit higher brow. For one, they used locally-sourced, all-natural dogs. Hey, that's a good thing. But the toppings, mostly the chili and slaw, and the composition, were a bit too gourmet to be a traditional Carolina dog. Their slaw was more of a cabbage salad, and it lacked the mayo to give it a creamier texture. The mustard was artfully zig-zagged across the top of the dog--not exactly the same thing as our beloved Carolina Hot Dog.


But for the occasional, 5-buck, fancy hot dog, Fetch was a treat. Their menu featured several regularly occurring dogs and a daily or weekly special or two. Always with creative toppings and combinations. 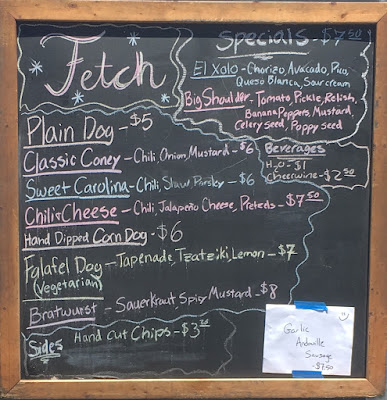 I guess the cost of that kind of quality ingredients made the business model hard to maintain. They still hold a soft spot in my heart.

My verdict: 4 weenies for creativity and healthier dogs

Posted by CarolinaHotDog at 1:11 PM No comments: 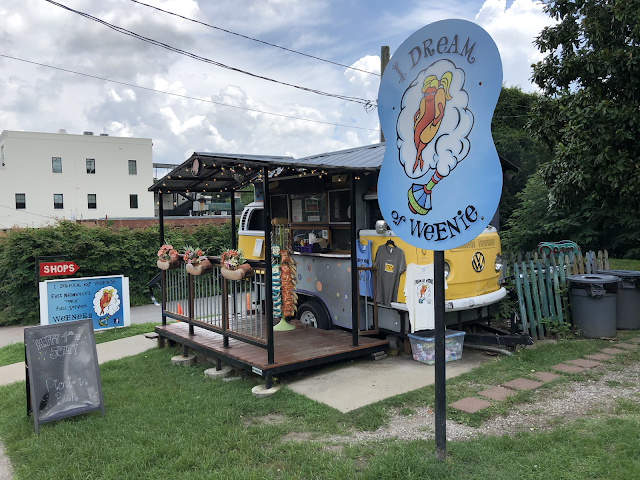 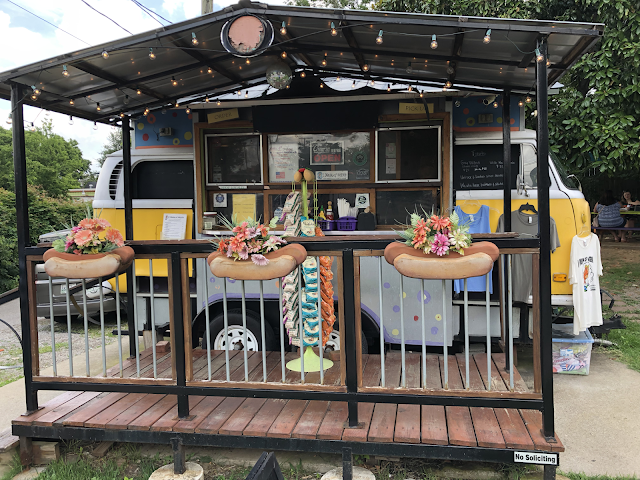 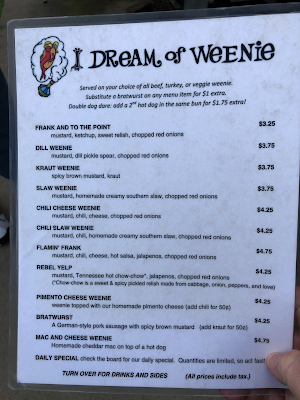 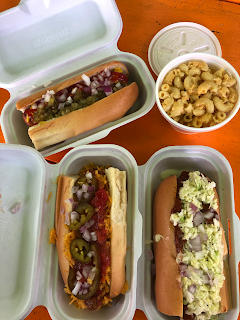 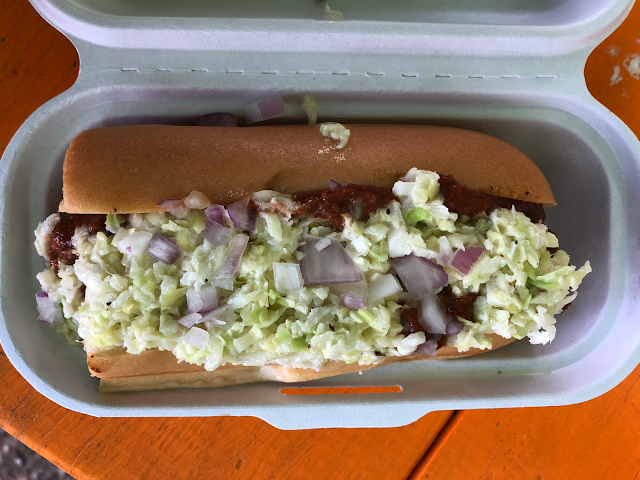 Posted by CarolinaHotDog at 1:13 PM No comments: 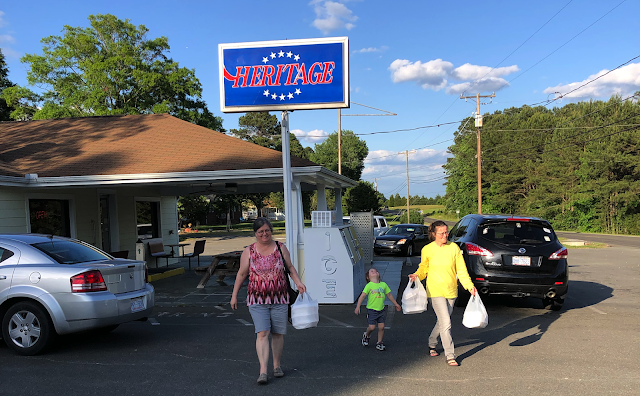 Sorry it's been so long. I hope to do better.

With that in mind, I tried a new-ish Carolina dog last night.

A couple of weeks ago, my parents mentioned the Heritage Grill, in rural eastern Durham county, not far from Falls Lake. A former gas station, now a restaurant serving from 7AM to 9PM. 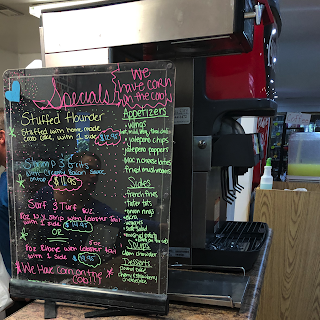 Along with an impressive dinner menu complete with specials for each night of the week, including steaks, pasta, and lobster, the Heritage Grill also serves standard fast food, from burgers to bologna, and, of course, Carolina hot dogs.

With the name, and location, I wasn't sure what to expect. The outside does look like a gas station or small-town general store from days gone by. The covered service area where the gas pumps once stood is now an area for folks to eat on picnic tables. 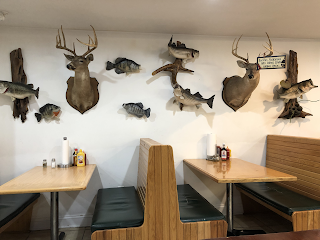 The inside is a combination convenience store, bait shop, and grill. Mounted game heads decorate one wall. Coolers for beer and soft drinks line the back. The grill is just inside the front door. I also noticed a salad bar along the mounted animals wall, but I didn't inspect it more closely.

A television with the non-offensive Spectrum News channel was mounted near the front door; I had feared another might be playing. However, after visiting, I was disappointed to find a Confederate Battle flag on their Facebook page.

We apparently hit the Heritage on Surf and Turn night, and I must admit the dinner specials were tempting. But you know I what I wanted...

I ordered one hot dog with the usual mustard, slaw, chili, and onions. Tempted beyond that, I also ordered a fried bologna sandwich. Sides include fries and a host of other sides. I opted to start with mushrooms and have okra accompany my meal.

The staff was friendly, and the service was swift. Portions were generous, if not just too much! 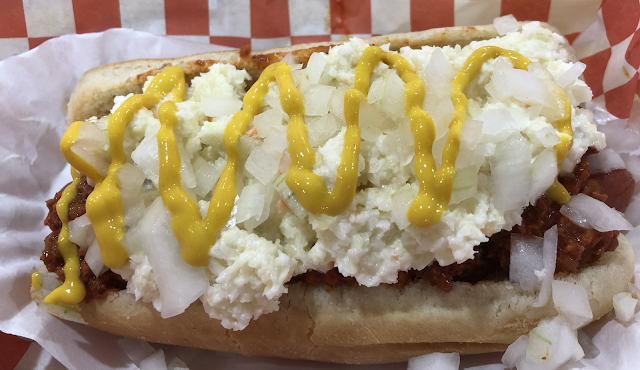 The hot dog was pretty good. The slaw, and there was lots of it, was really good--definitely fresh and homemade. The chili was very meaty, but it didn't really stand out. It was generously loaded, and that made it problematic to eat. I had to go in from the top and eat some of the slaw and onions before I could actually take a bite. 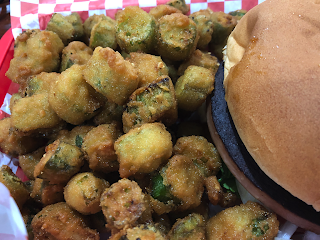 I enjoyed the other food as well. The bologna was fried nicely. The okra and mushrooms portions were overwhelming. And their homemade ranch was perfect for dipping.

I may have to return to try the steaks.

My verdict: another solid 3 weenies for the dog

Posted by CarolinaHotDog at 6:49 AM No comments: