From the street you’d never guess what a treasure The Roast Grill is. Its name glows in neon in the big picture window and a Coca-Cola sign with “Hot Weiners” is a clue. Otherwise, this building, located on West, just off Hillsborough Street in Raleigh, looks like what was once someone’s house. In fact, there’s a front porch next door.

If the outside makes the establishment look smallish, the inside accentuates the point. A counter with eight stools and a couple of really small tables round out the accommodations at twelve seats. It's tiny. Customers must maneuver as if they are solving a sliding puzzle to accommodate one another.

NC State memorabilia decorate the walls. A “no ketchup”t-shirt and pictures from the Roast Grill’s encounter with The Travel Channel’s Adam Richman and Man vs. Food add the perfect accent.

A motherly/grand-motherly woman takes your orders and prepares them. She also takes your payment when you’re ready to leave… and gives you a Tootsie Roll for the road. The ambiance alone is worth a visit, but we’re here for the dogs.

Ordering isn’t complex. They sell hot dogs. Nothing else—well, other than beer and soft drinks... and dessert: baklava or pound cake. Toppings for the hot dogs are classic Carolina Hot Dog fare: mustard, slaw, onions, chili. No, they do not have ketchup or catsup. Don’t ask.

The dogs are some of the pricier ones in the Triangle. They currently sell for $2.50 plus a quarter if you want both onions and slaw—well worth the extra quarter.

While I thought the hot dogs a tad expensive, I’d have to say I’d pay it again. They’re darn good dogs! They grill the wieners to a delicious crunch, and that smoky crunch really sets these hot dogs apart from the usual boiled ones. The chili has the right taste and meatiness. I would have loved a bit more, but it still added just the right flavor. The slaw is hand-chopped, not mutilated by a food processor. The same hands that chop the cabbage apparently chop the onions; they’re about the consistency. The onions on my dogs were just a little bitter, but that happens with onions.

Parking is street parking but not particularly hard to come by. Payment is cash only. Hours are 11-4 Monday through Saturday. With its location near so many Downtown night spots, I’m sure they’d make a killing if they were only open late night, but I guess they’re satisfied with the money they currently make. I know I'd sure buy 'em around 2AM if they were open.

For a hot dog that stands out served in a retro environment, you can’t go wrong with The Roast Grill. Yum!

Posted by CarolinaHotDog at 7:39 PM 3 comments:

In Wake County, you really can’t talk about Carolina Hot Dogs without Snoopy’s Hot Dogs making an appearance. They may not be the best hot dogs in Raleigh, but with numerous locations, they are probably the most recognizable hot dog stand in the Capital City, especially inside the Beltline. 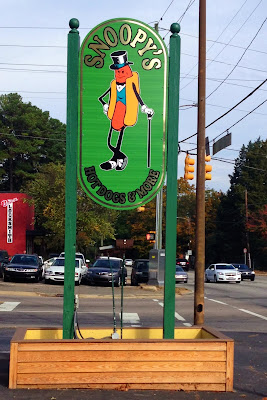 I originally sampled Snoopy’s several years ago, and as I recall, I wasn’t really impressed. Because of that, and another issue I’ll discuss a little later, I haven’t really been back. However, if I’m going to review Carolina Hot Dogs, Snoopy’s is definitely a location to include.

With a hankering for dogs and a mostly open mind, I decided to hit the original Snoopy’s at the corner of Whitaker Mill and Wake Forest Roads, just a few miles east of Five Points. It's a small building, a converted service station, with a walk- window for ordering and another for picking up. Because there are no public rest rooms, there are no tables or chairs for dining. (I used the trunk of my car.)

In keeping with my taste and tradition, I added coleslaw to the mustard, onion, and chili of the standard Snoopy’s Famous Hot Dog. At just over two bucks, these dogs are a small bit more expensive than most others I’ve sampled.

I unwrapped my order, and the slaw was a bit suspicious-looking. It was hard to tell if it was home-made or bought. Even upon tasting, I wasn’t completely sure, but if it wasn’t home-made, it was probably the best purchased slaw I’ve ever had. If it was home-made, it was sufficient, but not awesome. It blended well with the chili, onions, and mustard and made for a pretty respectable dog, certainly better than the ones I had remembered. The chili was tasty, but it didn’t seem as meaty as I typically like, but again, it worked. I did enjoy the hot dog.

And I would probably go back. Might go back. Depending on my mood. If my hankering for a Snoopy’s dog out-weighed my political conscience, that is. You see, there’s a message board/marquee out front, and through the years, most of its content has been innocuous—like it was the day I visited for this review—but many times it has featured conservative political comments that tend to rub me the wrong way.

It seems like a business owner would want to appeal to as many customers as possible. Liberal money spends just as well as conservative. Atheist and agnostic money, as well as Christian. The same with black and white, Islamic and Hindu. It’s like playing a biased newscast in a business. Wouldn’t it be better to aim at non-offensive—unless a business owner is happy to settle for a specific niche (see Chick-fil-a and Barilla).

Political messages aside, Snoopy’s offers a darn decent dog, and they have some pretty enticing pricing, especially on Tuesdays and Sundays.
My verdict 3 weenies

Posted by CarolinaHotDog at 6:11 PM No comments: